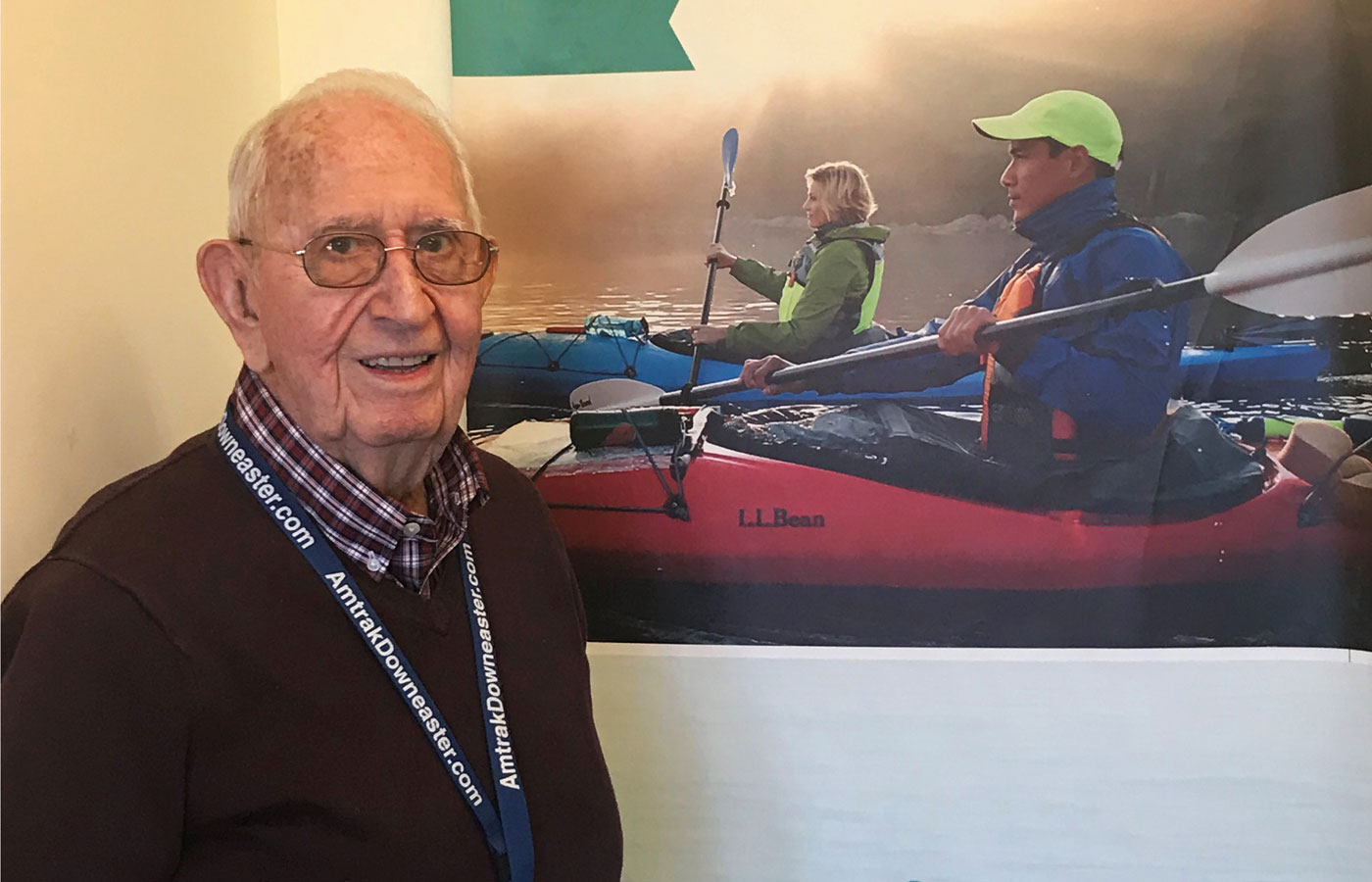 The sign on the building next to the railroad station reads “Freeport Information Center.” But the real center of information is the man inside: 86 year-old Ed Bonney, who not only manages the railroad station but guides visitors to L. L. Bean and Freeport’s other stores and restaurants. He also passes on Freeport facts and history based on his some seven decades of experience of living in Freeport.

One reason for this wealth of information is that he helped to create Freeport as it is today. For example, Ed led efforts to convert Freeport’s government from one relying on Selectmen, an annual town meeting and a manager to the town Council/Manger form that we have today. He would go on to chair the council three times. He also chaired the School Committee, Planning Board, Design Review Committee and the Train Committee. Yet he still found time to start the Freeport Economic Development Corporation and was one of the founders of the Freeport Merchants Association. During this time he also served for eight years as a Trustee and Treasurer of the Cumberland County Civic Center now the Cross Arena.

One amazing thing about Ed is that he works well at multiple levels. For example, he helped bring passenger train service to Freeport and Brunswick that now handle approximately 50,000 passengers per year between the two communities. Similarly, he was Executive Director of the Maine Democratic State Committee for eight years, working with people like Ed Muskie, George Mitchell, and Severin Beliveau. For years he has been a familiar face at the polling place on election days serving as either a Warden or a Deputy Warden making sure the election run smoothly.

Perhaps it has something to do with Ed’s early job as an air traffic controller at the New York Air Traffic Control Center-a job complex in specifics and critical in impact. Years later he found himself being interviewed for a job as Executive Director of the Maine State Bar Association, despite his own doubts about his qualifications. As he explained in an exchange for the George J. Mitchell Oral History Project at Bowdoin College, that during the interview a big tall guy, Charlie Smith, an attorney from the Biddeford/Saco area, asked me where I was an air traffic controller. I told him at the New York Center. He said he was a pilot and had his own plane and that he flew to Florida and many other places and that I may have controlled him sometime. I said maybe but that I had spent a lot of time working with European departure and arrival traffic in New York air space. The interview continued for an hour and finally, Charlie Smith looked at the Board members and said “Look, if Ed can control air traffic, he sure as hell can deal with us lawyers and judges.”

He not only held that job for twenty-five years but went on to be the President of the National Association of Bar Executives, only the second person from New England to hold that position.

The Freeport, when a teenaged Ed Bonney moved here from Winthrop, Maine was not today’s town. It was driven in no small part by a number of shoe factories, including one that employed 800 people,. There was also the fact that Route One was Freeport’s Main Street bringing not only visitors but traffic jams. In the 60’s and 70’s things began to change. The new Interstate was built that allowed traffic to bypass Freeport and the shoe industry started to move offshore. Ed said that even the sidewalks downtown began crumbling.

As the New York Times reported in 1984, “L. L. Bean died in 1967 and since then his grandson, Leon A. Gorman, headed the company and expanded the catalogue. But while the store grew, the town remained the same, the white clapboard buildings of Main Street, the green and gold fields of the farms nearby. All that began to change on the night a teen-ager set fire to Leighton’s Five and Dime on Main Street to disguise a burglary. Edgar Leighton’s landlord sold the building to a Boston developer who remodeled it, raised the rent and leased it to Dansk.”

What happened next was in Ed’s words simple: “There was a need to capitalize on the potential for expanding retail in Freeport and some of us went out and did something about it. I am pleased to have been part of that process.” The strategy: “Sit down with people who can make things happen”, like Leon Gorman, Ed Leighton, George Denny, Town Manage Dale Olmstead and others and hire the experts and consultants to make sure we did it right. The end result was a walking shopping village not a mall.
Despite all this work, Ed made time during the 1980’ and 1990’s to do some 90 local cable TV programs. The first was call “Freeport Perspectives” which he co-hosted with Bob Hartnet , and later “Conversations with Ed Bonney.” He also found the time to write a book “Betty & Ed Bonney’s Great Australian Adventure describing their five week trip Downunder.

Ed doesn’t give up easily. When he first ran for the School Committee he was beaten badly, but the next year he ran again and the vote was so close that recount had to be held. He won the recount by one vote which earned him the nickname, “Landslide” from his fellow School Committee members.

His wife Betty, who died 13 years ago, was similarly determined and was active along with him in Democratic Party politics. As her obituary noted, “She was not hesitant to let folks know where she stood on an issue and to suggest that they might want to change their thinking.”

She was the same with her husband. As Ed told the George J. Mitchell Oral History Project:

While they were living in Queens, they had had their second child and my wife said: You have a nice job and you should keep it but I don’t want to bring the kids up in the city and I am going back to Maine.” By that time I had been in air operations or air traffic control between the Air Force and as a civilian for six or seven years and I said: “To hell with it, I’m going back to Maine with you.” It turns out to have been a great decision.

Among their new experiences after returning to Maine was the inspiration they got from presidential candidate John F. Kennedy. Their commitment to public service was cemented after hearing JFK speak in Lewiston during his campaign. Before long they both were involved Democratic politics in Freeport, Cumberland County and the state. Ed met and began working with George Mitchell and Ken Curtis who would soon be Governor.

Ed thinks that Freeport is due for another revival or reinvention given the current changing nature of retail and the prevalence of on-line shopping. He thinks this effort should be led by town government and folks that are active in economic development ,retail, the arts, history, tourism and interested citizens. Ed cited frequent comments of train passengers that come to Freeport to shop but want something else to do for example, biking, hiking, entertainment and tours.

“There is a need for an experience beyond shopping.” And Ed Bonney, after all these years is till on the case.