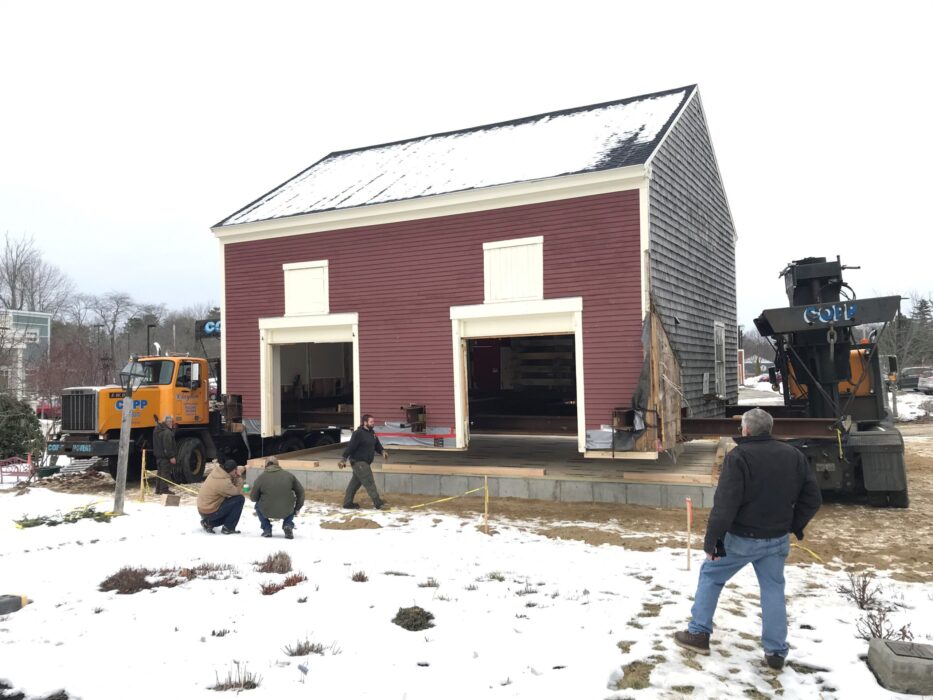 A fine Maine winter with a polar vortex is a hard time to get much outside construction work done, but with a lot of help from several hearty and skilled contractors, work on our Barn is well on its way! Despite the weather, our contractors were able to pick up the Barn, move it out into the parking lot, pour a new concrete foundation, frame a very robust new floor system, and finally get that Barn back on top! And the Barn was settled on its new foundation before temperatures plummeted dangerously low.

Well before the building movers and their panzer-like convoy of equipment pulled into the parking lot, our intrepid Collections & Education Manager Audrey Wolfe tackled the task of preparing the thousands of collection items we have stored there for their journey.

With the collections items carefully secured, Copp Building Movers of Cumberland took on the heavy lifting – in the truest sense of those words! First, the Garden Shed had to be craned out of the way to make room for Copp’s massive moving machines to get into position. Long puce-colored steel beams were then slid through the building; every vertical post was chained to these beams using robust railroad jacks.

The center of the building was supported by a pyramid of solid wood beams, or “dunnage,” situated on top of the steel beams.

After Sam Curtis of Durham detached the old floor system that had been patched repeatedly over 190 years due to the ever-present moisture below, the Copp moving machines were able to lift the building free and ever-so-carefully crawl it across the parking lot to its temporary address.

While the Barn was resting on its perch of steel & dunnage in the parking lot, the excavation team of Freeport’s Ricky Harrison’s Earthworks dug the foundation hole down to the depth of the water table, then prepared the base with fabric and a heavy layer of crushed stone.

Next up was Billy Hotham of Durham and his Second Generation Construction foundation crew who cheerfully set the footings and ample reinforcing steel, then poured the 5’ frost walls. Cheerfully, despite the 15” layer of snow that arrived mid-project! Without missing a beat, they had the forms stripped, the floor poured, and were on their way, leaving behind a solid new concrete base for our Barn.

Once Second Generation Construction was finished with their portion of the project, Ricky Harrison returned to install perimeter drains and a catch basin before backfilling around the new foundation. Sam Curtis returned to build the new, commercially rated, floor system.  Our staff dutifully tested it out, deeming it impressively sturdy and perfect for cartwheels.

Copp Building Movers returned to bring the Barn back and to find out: would it fit on its new foundation???? We all held our breath as the huge building was slowly lowered into place……. And it fit perfectly!

At this moment, we have Rick Gause of North Yarmouth stitching the edges of the Barn back onto the new floor system and preparing to build the new deck on the south end of the Barn. During March we hope to get started on some of the interior upgrades to the Harrington House which include widening several doorways to accommodate wheelchairs and to create a kitchenette on the entry level.