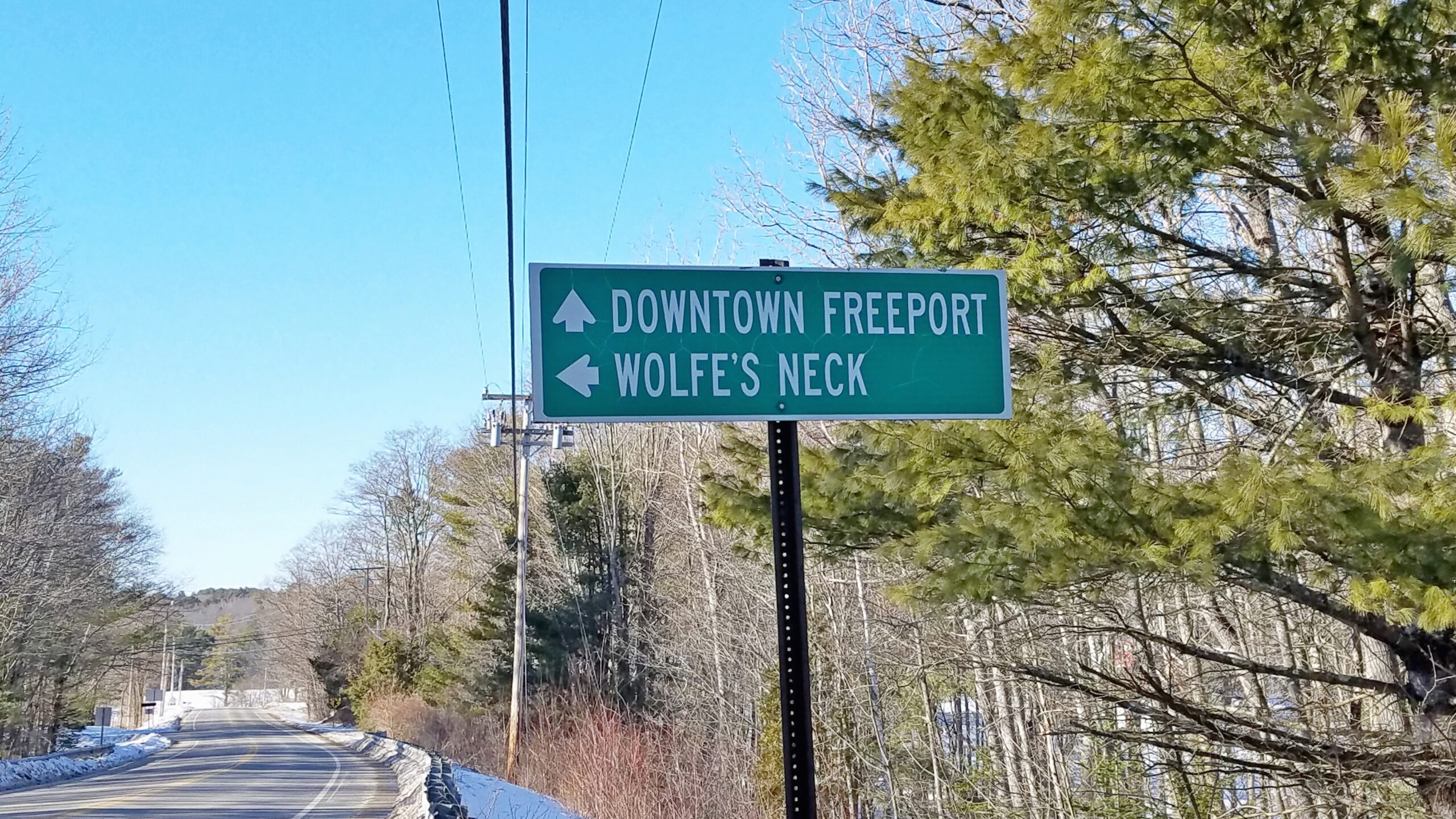 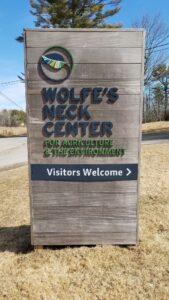 The various spellings of Wolfe’s Neck, as it appears today in the Wolfe’s Neck Woods State Park and at Wolfe’s Neck Center for Agriculture and the Environment, have been a source of mystery and contention for those who have known the neck for many years, and a source of confusion for visitors. The road down the neck is Wolf Neck Road. The sign on the old schoolhouse, owned since 1941 by neighbors as a clubhouse, says Wolfe Neck Club; long-time members don’t know how the “e” got on there and don’t like it much. The club incorporation papers say Wolf’s Neck. E or no e? Apostrophe or not? S or no s? It turns out the differences go way back.

The first question is how the peninsula came to be named Wolf in any form. Its first name was Shepard’s Point, for the first settlers of record, Thomas and Ann Shepard, pioneers here in the mid-1600s. A series of calamitous wars between the native Wabanaki people and the first European settlers, between 1675 and 1713, caused all Europeans northeast of Wells to flee. The name Shepard disappeared in court records and other sources in favor of Harrisickett Neck, as the river running along it was variously spelled, into the early 1700s. When conflict subsided, a Resettlement Committee in Boston invited the displaced to come forth with deeds or other early claims. A grand-daughter of the Shep-ards, Rachael Stevens, did so. She had married an English sea captain in Boston. His name was Henry Woolfe. In 1733 they were successfully awarded 263 acres, the extent of the original Shepard settlement from the point through today’s state park.

Within about 10 years of their arrival, the point became Wolfe Neck, the “e” remaining, the second “o” somehow gone. It appeared that way on Freeport maps of the peninsula in 1857, 1871, and 1909. But other mapmakers did not agree. The 1857 Map of Cumberland County and the 1871 Atlas of that county added the “s” for Wolfes Neck. Then the State Atlas of Maine in 1887 and 1898 kept the “s” and took out the “e” for Wolfs Neck. The Gazeteer of the State of Maine in 1886 added the apostrophe and declared it Wolf’s Neck. 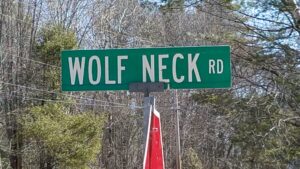 Credit for research on this topic goes to Pat Bailey, the interpretive specialist at Wolfe’s Neck Woods State Park in the 1980s. In 1988 she was pre-paring interpretive panels for the trails in the still relatively new park. The land had been given to the state of Maine by summer residents L.M.C. and Eleanor Houston Smith in 1969. It opened in 1973, named by state officials, as Wolf Neck Woods State Park. However, the Smiths had started a pioneering organic farm in the 1950s and named it Wolfe’s Neck Farm as early as 1959. Mrs. Smith had discovered a late-nineteenth-century, illustrated genealogy of the family after whom the neck was named, headed by the name spelled Wolfe. (The artist, Henry Parsons, likely did not know the family. Such documents were popular at the time and were created and duplicated for sale.) Thus, the Smiths named their organic farm to honor the early settler by putting the e and the possessive onto his name. The name also would disabuse people of the idea that the neck was named for the animal, as the official roadside signs implied. (The farm is now Wolfe’s Neck Center for Agriculture and the Environment.) However, the state government had named the park, and it remained Wolf Neck Woods in 1988. 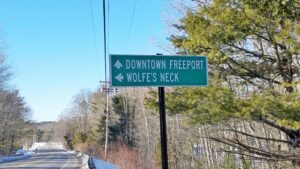 Pat Bailey had to decide how to spell the name of the park on her new panels. Mr. Smith had passed away in 1975; Mrs. Smith died in 1987, the year before Bailey had to make her decision. For advice, she wrote to John W. Skillin, the manager of the town park at Winslow Point. As a native of Freeport, he wrote in answer that he had always heard it called Wolf’s Neck. He had World War I letters home addressed Wolfe’s Neck, both possessive forms. But, he wrote to Pat Bailey,” in the 1930s the topographical maps chopped off the possessive S on all names. The coastal charts quickly followed, but the residents of the community retained this [the possessive] and still do. Among the residents of Freeport (natives), this is a sore point. Most have taken on the attitude that you can’t tell the state anything because they will do it their way anyway.” Ms. Bailey also consulted Fred Bartlett, Director of Real Property Management for the state, who reported that the policy of the department for many years had been to use geographic features rather than people’s names and were guided by the topographic maps, which had been stripped of possessive.

John Skillin advised Pat Bailey to name the park to match that of the farm. “I feel that if Wolfe’s Neck Farm is the name used by Mr. and Mrs. L.M.C. Smith for their saltwater farm then perhaps the State Parks people should reconsider their name for the park. If the park was at one time part of the Smith’s farm then why should the name be different?” His advice was taken. It also happened to preserve the possessive form Skillin knew growing up in town. 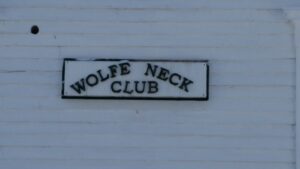 However, the road is still Wolf. And the sign on the club is Wolfe. And the signs on the park and the farm read Wolfe’s. And current articles that touch on the place use every alternative available in the same piece, making it appear the proofreader had failed. Nowhere does Henry Woolfe appear as he called himself his entire life.

This piece was originally published in the Spring issue of the 2021 Dash.